My Cubs and Bears Collection

Sorry for the delay in posts, but I have been busy moving.  Here is what has happened in the month of September:

6th:  Sent baseballs to Derrek Lee (I know he is no longer a Cub, but I am trying to get autographs of current and former Cubs), Reed Johnson, Blake DeWitt, and Marlon Byrd.

12th:  Received baseballs back from Ivan DeJesus and Bryan LaHair -----Thank you very much Mr DeJesus and Mr LaHair!!!!

16th:  Sent baseballs to Andrew Cashner, Tony Campana, and Stephen Strasburg (I know he isn't a Cub, but my older son likes him).

26th:  Sent photos to the following current/former Chicago Cubs and Chicago Bears:  Tom Thayer, Dennis McKinnon, and 8 other (will have to look them up).

So far, a lot of stuff sent out and very little returns

The Hawk comes through!!!!!

I was at the 19 Jul 2011 Marlins vs Padres game, I got there early because one of my sons had purchased a dugout buddies ticket (it allows him to sit in the Marlins dugout while they are taking batting practice and meet some of the players and get autographs).  All of the parents had to sit and wait at Gate G.  Mario (the Marlins PR person) and I were talking and he remembered me from January 2011 when the Marlins came and visited USSOUTHCOM.  Andre Dawson was supposed to show up that day, but was unable to attend.  Mario remembered this, and took me inside the Marlins offices and asked me to sit down and wait.  About 5 minutes later he came down stairs and handed me this signed item!!!!!!  Talk about a great day!!!!!! 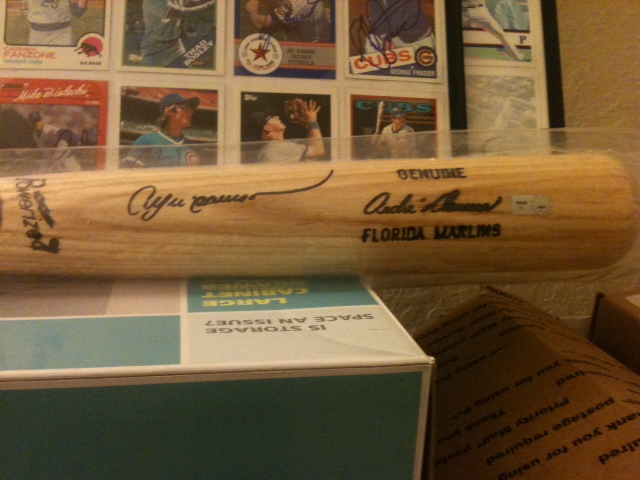 About a month ago I sent a mini helmet to Mr Cub, Ernie Banks, it came to me in the mail today signed.  I enclosed a donation of $5.

Once again the kids and I headed to the ballpark to obtain former Cubs autographs.  Today we were looking to get Sergio Mitre, LaTroy Hawkins, and Casey McGehee; we were able to get Mitre and Hawkins in the bullpen prior to the game.  We never ended up getting McGehee, but we did get signed balls from Yovani Gallardo and Mark Kotsay from the Brewers and Chris Coghlan of the Marlins.  Anything not a Cub or Marlin is for sale/trade.

My sons and I went to the game in hopes of grabbing former Cubs autographs (Fuld, Farnsworth, and Cruz).  We were able to obtain Farnsworth's autograph (BTW-he is a great man.  I asked him in the 5th inning if he would sign for me for my former Cubs collection and he said if he isn't pitching he will - and when the game ended, he looked for me and waved me to throw a ball to him and he signed!!)  Most collector's say it is wrong to bother the players during a game; but since he normally doesn't come into the bullpen until later innings, I figured I would ask him if he would sign after the game.  Thank you very much Mr. Farnsworth!!!!!!!!!

We also obtained autographs of Gomes and Russell (Rays) before the game while they were in the bullpen.

My sons and I had a great day at this game.  We were able to obtain autgraphed balls of Alfonso Soriano, Jeff Baker, Koyie Hill, and James Russell.  We were also able to get Koyie Hill, Edgar Tovar, Mark Riggins, Scott Maine, Bobby Dernier, and James Russell to all sign a mini helmet.  Once again Kerry Wood, Kosuke Fukudome and Carlos Marmol were elusive to us.

Well I finally got a Cubs spring training return - Darwin Barney.  It is viewable under the "Thru the Mail Autos" tab.

I know it isn't right!

I know it's against all of the rules and regulations of being a Cubs fan, but I heard that Mark McGwire was signing via thru the mail and I had to get a ball signed by him.  So here it is: 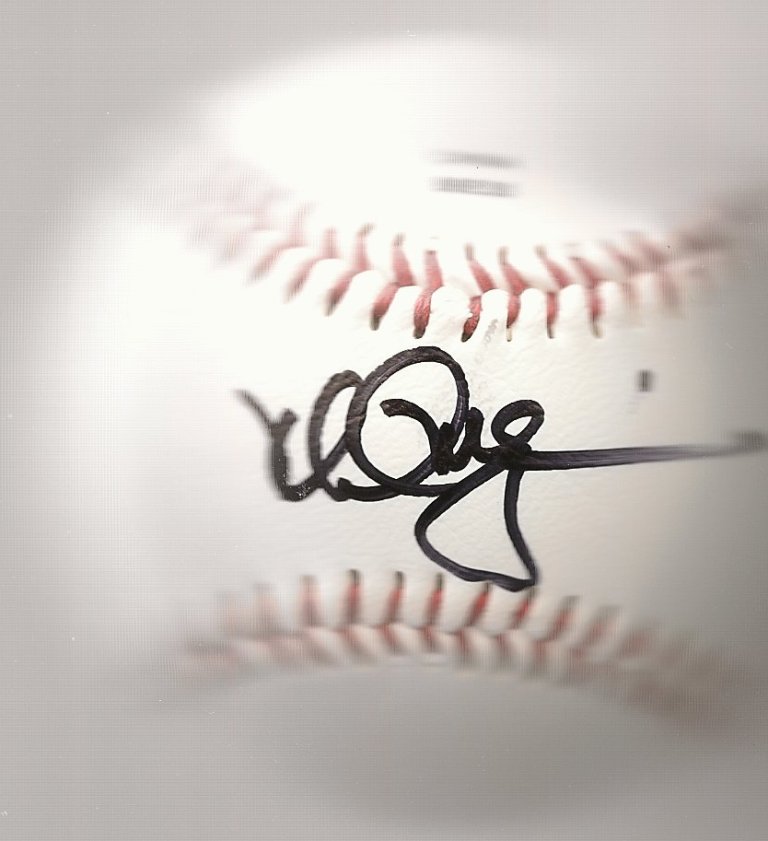 as title says, I have updated some of the Cubs Certified Graphs area and will continue updating the site tonight and this weekend.

I just received a bunch of Chicago Bears autographs that a friend on www.sportscardforum.com got for me while attending pre-season and some games.  Much appreciation goes out to him!!!

Start a Free Blog at Webs.com